In Part 1 on this topic, I described genital reflexology. This information has several implications for lovemaking, alone or with a lover.

Dunas says that if a woman frequently receives stimulation of the clitoris and surrounding area while the interior of her vagina remains untouched, her kidney system can be over-stimulated. 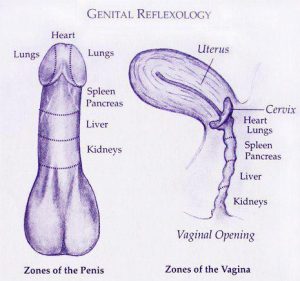 This can lead to an imbalance making her susceptible to kidney-related symptoms, such as bladder conditions, memory loss, gynecological disorders, back or knee pain, and more.

If a man receives frequent oral sex or manual stimulation in a way that the head of his penis is stimulated far more than the shaft, he could end up vulnerable to symptoms associated with the heart and lung systems being over-stimulated, such as poor circulation, anxiety, respiratory conditions, and sadness.

During intercourse, vary your strokes, not only for pleasure – it’s beneficial to your health as well. Alternate deep and shallow thrusts. Try a “screwing” action, or vary your angle of penetration by changing your position, even in minor ways, so as to eventually stimulate the entire shaft of the penis and vaginal canal.

Such variety of action simultaneously touches many pleasure zones while energizing the chi of the corresponding organ systems in a balanced fashion.

So now you have a health and wellness program that couldn’t be more fun!

In Part 1 on this topic, I described genital reflexology.