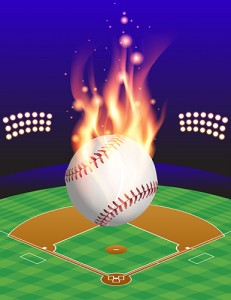 Run all the bases for
“Out of the Ballpark” Sex

Remember the old baseball analogy that boys used to describe how far they got (or didn’t get) sexually with a girl? (I know this is old school – now they often just “hook up.”) Anyway, you may recall they would talk about getting to “second base,” “scoring ” or hitting a “home run.” Or they’d complain, “She won’t even let you get past ‘first base.’” Hold this thought; I’ll come back to it.

The consensus is that about 90% of women and 10% of men have a fundamentally yin, or feminine, sexual essence, so I’ll refer to women here. (But stick with me; this relates to men as they age too.) Yin sexual energy is like water, slow to heat up, but once boiling, it lasts a long time.

If a woman doesn’t have a chance to get sexually warmed up to at least simmering before she receives direct genital stimulation, even if she does manage to have an orgasm, she’s not likely to have the most fulfilling sex possible. And as a direct consequence, her partner won’t either.

Here are some possible scenarios of what may happen instead. She may show disinterest and withdraw. She may continue and go all the way to intercourse, but not enjoy it very much, which will probably lead her to be less interested next time.

Here’s another typical, but less understood, series of responses that might occur.

She may unconsciously draw upon her yang (her more active masculine) energy to help herself “get into it.” Depending upon the woman, this may or may not help her get turned on enough to have an orgasm. She may have one or more clitoral orgasms, which is great… but if that’s where it ends, she’s only just begun.

The clitoris is the yang part of her sexual anatomy, analogous to the penis.

Most sexually healthy women will tend to want vaginal penetration of some sort after clitoral orgasm. (I must stress that all women are unique in their sexual response, so not wanting this is not necessarily a signal that anything is wrong.) The vagina is yin (or feminine and receptive) and the access to her most creative, feminine reproductive organs and energy.

If a woman’s sexual energy is not properly stimulated and circulating throughout her entire body, she is likely to draw upon her yang (her more active masculine) energy to get going sexually. As a result, she may not be very responsive vaginally, or she may not feel her orgasms throughout her body.

Once lovemaking is over, she may feel vaguely (or not so vaguely) unfulfilled and unsatisfied, or perhaps she’ll just be starting to get charged up sexually – when it’s over for her partner. This is because her feminine energy did not get a chance to be fully heated and circulated throughout her body during the encounter.

If a woman does not feel deeply peaceful, loving and open after lovemaking, her yin, or feminine needs are probably not being fully met.

Don’t be fooled by a woman who has a high libido and demonstrates a lot of active yang energy outside the bedroom.

She may be great at “sport” sex, and drop exhausted and apparently satisfied after a sudden, passionate session. These are often the women who secretly long to connect with their deepest feminine being during lovemaking… but they need help doing so. When they do connect with their deep feminine, their wild passion and responsiveness can build to even greater heights, leading to fulfillment they hadn’t realized was possible. 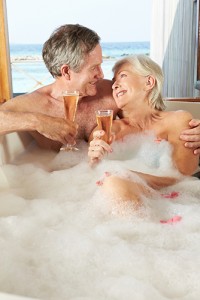 Non-sexual sensuality and affection work as foreplay for most women.

The lover who helps a woman access this part of herself will be appreciated beyond measure.

Why do you think sex was so hot when you first got together? Of course, there was the newness of it.

But what is just as critical is the slow build up was a natural progression in your relationship. You probably made plans to be together, and both of you had time for delicious anticipation to build. You may have started with kissing and caressing, even just holding hands long before you got to the “juicy stuff.” For a woman, this is foreplay that helps warm up her sexual energy.

So, it’s back to baseball. Most yang dominant men (or females with predominately yang energy) learned at some point in their sex lives that they had to go through first, second and third bases to score. Then, once they’re in a comfortable relationship, they may try starting with third base, or even a home run, forgetting all the preliminaries that contributed to hitting it out of the park early in the relationship.

Another critical factor to understand is that a lot of women settle more into their more feminine energy as they get older and as a relationship progresses, so running all the bases becomes increasingly important to keep your sexual life vital.

There’s nothing wrong with the occasional “quickie” (think fast food), but realize there will be a limit to the range of satisfaction most women can get from it.

What evolved masculine lover doesn’t want a partner who is fully receptive, responsive, ecstatic and, ultimately, fulfilled? To help a woman access the full range of her feminine sexual potential, be sure to “run all the bases” more often. Balance any quickies with long sessions of slow delicious gourmet lovemaking (prefaced with abundant appetizers of romance and affection).

The tables can turn as time goes on, and sexual roles may need to shift.

After menopause, as the estrogen-testosterone balance shifts, a significant percentage (not the majority) of women become more sexually driven. Ironically, this can occur just when her male partner finds his libido shifting in the opposite direction (more common). Balance can be restored if you remember to “run all the bases” – this time the man may need more preliminaries to get interested and fully aroused. So everybody wins!

If you’re alone, this applies to you too.

Once in a while, “run all the bases” with yourself, like you would want the perfect lover to do. Try relaxing, caring for and expressing love for yourself, and gradually increasing your arousal. This can be much more satisfying than going straight for a “home run,” just for the release.