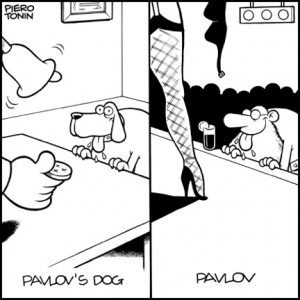 If you took high school science, this may ring a bell (pun intended)… but there is more to this doggie style story than meets the eye.

Pavlov, a 19th century Russian physiologist, would ring a bell every time he fed his dogs. Eventually, this developed a neurological pattern whereby the dogs would begin to salivate any time the bell was rung, even if no food was present.

Connect The Dots “Pavlov’s Doggie-Style” To Create New “Conditioned” Turn-Ons for Yourself Or Your Lover.

In this case, the arousing activity you start with (like oral sex) is the trigger, analogous to the dog food. Your turn-on is like the dogs’ salivation. And the part of your body you’re trying to eroticize with specific stimulation is like the bell.

Do this again several times on different occasions, and eventually you will find this new part of your body has become erotically sensitive to that type of stimulation all on its own. Your conditioned response will be to get turned on by this new stimulation, even without the initial trigger (like how the dogs salivate when the bell rings, even without the food).

If you’re doing this for your partner, he or she doesn’t even need to know you’re helping him or her in this way. A little sneaky – but with a generous spirit, right?

You can use this method to create a playful hack for early foreplay, even tastefully arousing your partner (or, ideally, each other) at a party, watching a movie, or in public places.

To set this up beforehand, sometime when you’re making love and totally turned on, eroticize a body part that is not typically considered sexual, like the little finger or the inside of the wrist. Stimulate this area several times while you’re turned on.

Then, when you’re in a situation where you feel like getting sexy below the radar, stimulate/caress your partner’s wrist (or whatever you’ve chosen). You’ll have fun and be ready to take it to the next level at the first opportunity.

My “Love Unbound” music for lovemaking with Auditory Pheromones® is superb for creating a conditioned response between you and your partner for benefits like the following (according to tons of satisfied lovers):

The 72 layers of resonant frequencies infused into the deliciously sensuous music work their magic when you play “Love Unbound” in the background while you make love.

After you’ve used it in this way while making love on multiple occasions, you will eventually find you have become conditioned to enjoy these kinds of responses just by the trigger of getting sexual with each other… and you won’t even need the music to get you there any more!

CLICK HERE to learn more about this revolutionary “Music for Better Sex.”